The president specified that the launch could be between three or four weeks, however, he has also shown his conviction that, in case the cure against the disease is not achieved, the virus “will disappear.”

The president of the United States, Donald Trump, has assured this Tuesday that The United States is “a few weeks away” from getting a vaccine against COVID-19, specifying that it could be “three or four”.

“If you want to know the truth, the previous government would have taken years perhaps to have a vaccine because of the Food and Drug Administration (FDA) and all the permits. And we are just a few weeks away from achieving it (…) it could be three or four weeks, ”said Trump during an event in ABC News with undecided voters.

However, he has also shown his conviction that, despite not being able to get a vaccine against the disease, the virus “is going to disappear”, an idea that has been repeated repeatedly since March. “It is going away. It is going away. I keep saying it ”, he has riveted.

During the meeting, Trump has addressed his management of the COVID-19 pandemic in the North American country and has defended that he did not minimize the threat posed by the pandemic and that, instead, “reinforced” it.

Trump has faced criticism for his handling of COVID-19 since journalist Bob Woodward revealed a series of recordings in which the president acknowledged “downplaying” the pandemic in March this year. 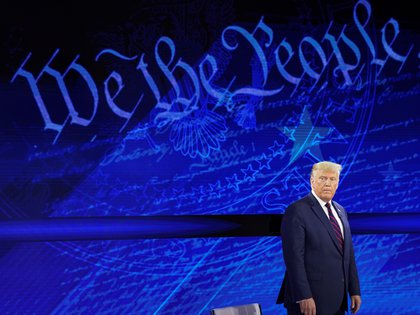 The journalist tells in his new book, entitled ‘Rage’ (‘Rabies’), that the president knew the dangerousness of the virus, that it was highly contagious, that it was more “deadly than even a very strong flu” and that, despite this, he repeatedly downplayed it publicly.

According to the president, he “always” wanted to “downplay” the pandemic because, in his opinion, the job of a president is “to keep the United States safe” and, also in March, he pointed out that he “still” liked to minimize the threat because it was not intended to “create panic.”

However, this Tuesday, Trump has claimed that he did not minimize the pandemic. “Well, I didn’t minimize it,” Trump has said. “In fact, in many ways, I reinforced her, in terms of acting. My performance was very tough ”, he assured, exemplifying his words with the travel ban issued by the United States against China and Europe in February and March.

The president has thus defended his response to the COVID-19 pandemic in the United States. “We did a very, very good job when we issued that ban,” he continued. “Whether you call it talent or luck, it was very important because we saved many lives when we did it,” he concluded.

After Woodward’s information was made public, Trump defended his management of COVID-19 in the United States and insisted that a sense of panic cannot be displayed. “I love our country. And I don’t want people to be scared. I don’t want to create panic, ”he said.

The United States is the country hardest hit by the COVID-19 pandemic in the world. So far, it has confirmed 6,537,627, 34,597 in the last 24 hours, according to data provided by the Centers for Disease Control and Prevention (CDC). Deaths from the disease reach 194,092, 387 of them verified during this day.