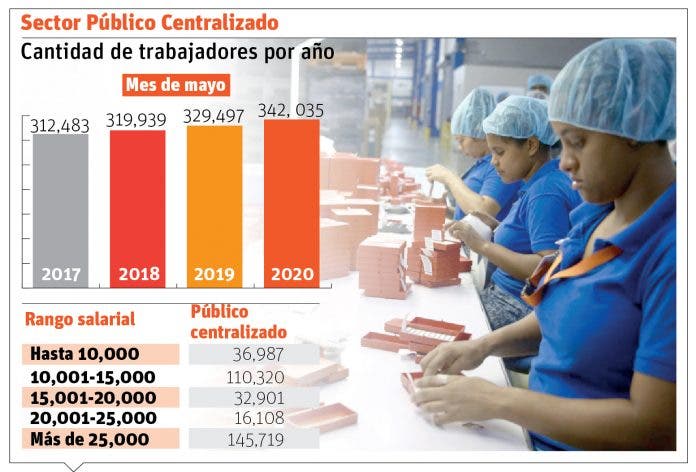 SANTO DOMINGO.- Uncertainty takes over public employees in the centralized sector due to the possibility of being fired from their jobs with the change in presidential management.

Such is the case of Maseo Acosta, who has been working for 12 years at the Dominican Institute of Hydraulic Resources.

He says that although he knew that this was not a permanent position, leaving in the midst of a crisis is difficult, since “there is no employment anywhere,” he said.

The same goes for José Polanco (not his real name), a digitizer at the Ministry of Education in Samaná, who says that he has been analyzing who he will go to find another job for several days. “The first days are difficult, but something will be found,” Polanco regrets EL DÍA.

Already, in different ministries, the hall talks begin due to the tension of dismissals of employees with more vulnerable positions, due to their political dependence.

But it is not for more. In fact, traditionally in changes of command the first to leave public institutions are the janitors, drivers, secretaries, assistants, as well as those of the lower-ranking state bureaucracy. But now it is aggravated by the particularity of an economic crisis caused by the Covid -19 pandemic, as explained by the National Confederation of Union Unity, after noting that in this category there are more than 200 thousand citizens.

In the case of civil service and administrative career State workers, although they may be dismissed, they will have to receive financial compensation. These reach nearly 100,000 workers.

To the list are added nurses, doctors and teachers and some administrative technicians who, in general, when faced with these charges, the governments refrain from changing them because they know that they will meet with resistance from trade unionists, added the National Confederation of Trade Union Unity. .

In other words, of the 342,039 registered in the Social Security Treasury until May 2020, in the decentralized public sector more than 100,000 could continue in their positions.

In the event that administrative career employees are terminated, they are entitled to receive their labor benefits for their years of service, assures the labor law expert and former Vice President of the Republic, Rafael Alburquerque.

It details that these employees can demand their right before the Ministry of Public Administration and if they do not get a response there, they can also sue in the Administrative Court.

– Job adjustments
A commission of the Modern Revolutionary Party, the winner of the last elections, studies the institutions that need personnel to complete them with their followers, an external source informed EL DÍA.