DR is fertile ground for gambling, according to psychologists 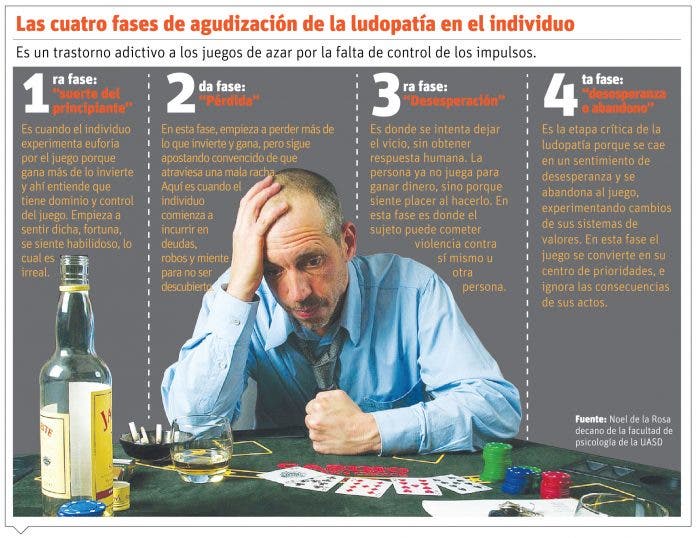 SANTO DOMINGO.-The Dominican Republic is a fertile ground for the development of problem gambling, a mental disorder of addiction to gambling or gambling, whose critical condition can trigger suicides or, in rare cases, murder.

This is due, according to the psychologist Noel de la Rosa, to the high rate of poverty, in which more than a million Dominicans are submerged, according to the latest study by the Food and Agriculture Organization of the United Nations ( FAO) of 2020.

The specialist affirmed the above, when asked yesterday by EL DÍA about the triple murder in Bonao committed by the vigilante, José Pascual Alejo, who confessed the fact by stating that he was overwhelmed by a debt of 40 thousand pesos in a dice game.

It is object of study
Although Pascual does not have a clinical diagnosis of gambling, de la Rosa stressed that the case should be evaluated with this possibility, since the trigger for the event was a losing bet.

In an academic investigation on the psychosocial problems of the country directed by the also dean of the Faculty of Psychology of the Autonomous University of Santo Domingo (UASD), of a sample of 100 people, 44 women and 66 men, 81% affirmed that engages in some kind of game frequently.

This survey was carried out in the second semester of 2019 in the Capotillo, Los Mina, Villa Duarte and El Almirante neighborhoods.

On his side, the psychiatrist, César Mella, affirmed that in the case in question the loss of 40 thousand pesos constituted a definitive defeat for that guard, whose salary should not exceed 10 thousand pesos. This event was the spark, according to Mella, that detonated accumulated frustrations that ended with the death of three innocent people.

“Specialists are powerfully struck by the fact that the watchman has not been able to explain why he committed the act and how he related it. Normally these episodes end with a suicide but strangely it was not the case, “he said.

In this he agrees with de la Rosa, who said that it is an important case for the study of the different variables that led this person to commit the crime.

Many lotteries
Another factor that affects the disorder are the innumerable lotteries, games and raffles, existing in the country, where only lottery banks are more than 135 thousand at the national level, of which only a little more than 30 thousand are authorized by the Treasury.

According to the president of the Federation of Lottery Banks (Fenabanca), Rubén Jiménez, each betting bank averages a daily income of 3,700 pesos, that is, the betting business moves about 499.5 million a day. Although he said that the gains are few.

In that sense, according to de la Rosa, the country’s authorities have underestimated the disease, disdaining the magnitude of its impact, where adults have standardized the incitement of this vice in children when they are sent to gamble, according to he said.

Not all are sick
On the other hand, the psychiatrist, Ivelisse Acosta, clarified that not everyone who plays is sick. He said that the gambler has compulsive symptoms of gambling until he falls out of control, just to feel the pleasure.

“These individuals are characterized by neglecting their roles and responsibilities and focus their priorities on the game. It is very difficult for us specialists to treat them, because most of them do not recognize their disease ”, he specified.

He stated that since it is a disorder in which the person feels good practicing it, he regularly does not go to an expert.

30 years in jail.
It is the sentence that José Pascual Alejo could receive for committing the triple murder that he confessed.

VIDEO: Dozens of cancellations are reported at Inposdom, Santiago

In Row, avoid queues and waiting

WHO: pandemic still in “worrying and intense” phase in Latin America