The president of the Chavista National Constituent Assembly had suspended his program on Wednesday due to an alleged allergy. This Thursday he announced that the COVID-19 test gave him a positive

After the multiple speculations that caused the suspension of his program on Wednesday “With the gavel giving”, this Thursday Diosdado Cabello confirmed that he contracted coronavirus.

“Dear colleagues, I comply with informing that after having undergone the corresponding tests, I have been positive in Covid 19, since now I am isolated, complying with the indicated treatment, thanks for your good wishes, with high morale”, The president of the Chavista National Constituent Assembly (ANC) pointed out on his Twitter account.

“Comrade Diosdado Cabello has just taken out a message on his twitter account informing that after taking the PCR tests for Covid 19, he has tested positive. All the solidarity of my family. We are with you, Diosdado. All the solidarity of the people of Venezuela, ”said the dictator Nicolás Maduro during an address on radio and television.

“I am sure that with your moral strength and our José Gregorio Hernández you will pass these days. It is already taken care of, it is already well. Well, to face this trance and to overcome it ”added the Chavista leader.

On Wednesday the first vice president of the United Socialist Party of Venezuela (PSUV) had canceled his program due to a “strong allergy.” “Since yesterday I have been struggling with a strong allergy, the doctors and my family have ordered me to rest,” said the Chavista official on his social networks. Finally, it was a coronavirus. PlayMurouro’s message after Cabello confirmed that he contracted coronavirus

Hair adds up like this to the Governor of the state of Zulia, Omar Prieto, also an adept at the Chavista regime, who on Tuesday night was hospitalized for respiratory problems, and after undergoing the Covid-19 test, he tested positive. “Zulia people, thank you for so many messages of affection. I report that after undergoing COVID 19 real-time PCR testing, I have tested positive. It is the risk that, likewise, our doctors, nurses and firefighters assume. We are in battle and stable. God with us, we will win! ”, expressed on his Twitter account.

The official is admitted to a private clinic near Maracaibo.

“The virus exists, it reaches anyone, you have to take care of yourself. Let’s take care of ourselves, ”said Maduro.

In Venezuela, some 8,010 cases of COVID-19 and 75 deaths have been reported, according to data from the regime. But opposition leaders have questioned the figures, pointing to a lack of transparency in reporting cases and accusing those who contradict the information of persecution.

“Unfortunately, Nicolás Maduro continues to lie, continues to manipulate the data of positive cases and the mortality data (due to coronavirus),” the opposition deputy said in a virtual press conference on Wednesday. José Manuel Olivares. 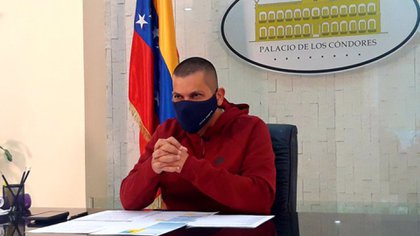 According to the legislator, exiled in Colombia since late 2018, at least 130 people have died of complications from the disease in Venezuela, 59 more than reported by the reports.

Maduro points out that Venezuela has handled the outbreak better than other Latin American nations, and insists that most of the oil country’s cases come from Venezuelan migrants returning from Colombia and Brazil, an argument rejected by specialized medical groups. The Chavista dictator even refers to COVID-19 as the “Colombian virus”.

“We are facing a tremendous pandemic in the world. The numbers are creepy. This is the true outbreak in Venezuela. Before what we had seen was the arrival of the pandemic. Now we are seeing the outbreak that came with the Colombian virus through the trails, “said the dictator in a public message issued on Wednesday.

The WHO recognized that coronavirus can be spread through the air